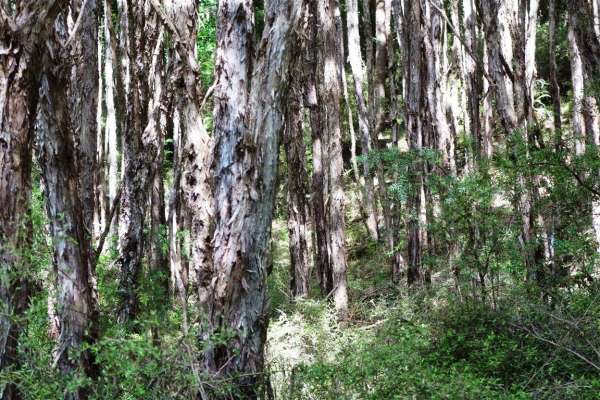 Snowflakes were settling on us as we ate lunch at the picnic tables on Mt Cawte (426m), but being on the lee side, we were out of the bitterly cold wind. Our views to Kaiuma Bay and down the Pelorus Sound were obliterated, however the snow showers soon passed and the sun came out and our view returned. It wasn’t long before the other half of our group, who had come in from the more southern end, met up with us. They experienced the snow near the higher summit (474m). After exchanging car keys, we continued along, reaching the summit some 20 minutes later. Ducked down on the lee side is a viewpoint with a picnic table. A good place to enjoy the sights and sun before descending down the southern end on Mt Cawte.

The variety of weather was phenomenal – with all seasons included. The whole trip took around three hours, and with there being four carloads, we had two carloads starting at either end. Mostly we were walking in regenerating bush dominated by kanuka, but near the summit the track we went through a stand of beech.

Those who braved the elements on this wintery day were: Maria B, Rob, Julian, Jacqui, Maria F, Jocelyn, Chris and Jo, Uta, Alison, Graham and Pauline, Penny, Lesley J, and Vanessa.