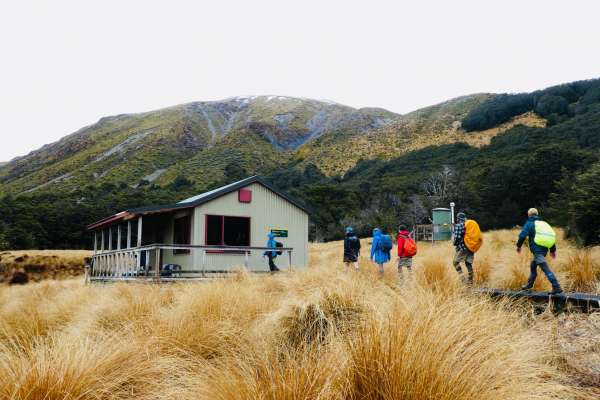 Mt Robert carpark was the starting point for our tramp to Speargrass Hut and return the same way. Regardless of the wet weather, eleven trampers set off at 9am for the hut. Rooty would best describe the majority of the trail and the Speargrass Creek needed to be forded due to a section of the track being destroyed by a significant slip which has also wiped out the alternative flood route.

The hut was reached at 12.45 and lunch was enjoyed sitting on the hut’s covered deck. There were some other trampers already in the hut having their lunch and didn’t seem all that warm of having a bunch of wet trampers from Waimea Tramping Club compromising their peace and quiet (don’t blame them). The hut is set in a nice clearing with grass and tussock and gives good views of the surrounding higher mountains, which had quite a bit of snow on them.

The walk back to Mt Robert carpark was achieved in three hours. Despite the steady rain our spirits weren’t dampened and our day outing was an enjoyable one. Plus, it also gave the opportunity to test the wet weather gear.