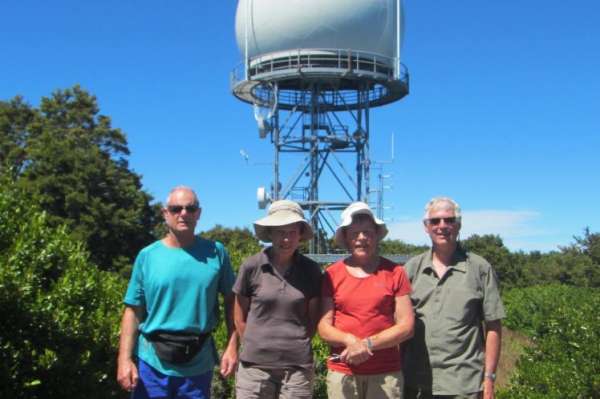 There were four of us signed up for this challenge on a fine and warm weekend. We travelled to Picton on Saturday afternoon arriving about 3pm, where I had a friend’s house for us to stay in, just up from town. After getting settled in we decided to do a 90 minute walk from Victoria Domain over the bridge and on to the Bob’s Bay Walk, coming back via the Harbour View Track. Just what was needed after the long drive. After a shared meal and great conversation it was nighty night reasonably early.

Up at 6.45am it was hoped we could get on the track before 9am. Whites Bay was busy with weekend campers and we must have got the last two parking spots. So it was a start before 9am on the Black Jack Track, with gravel at first and it didn’t take long to warm up. Chris was in his element again, pointing out plant life and interesting flora and fauna. There is a great viewpoint on the edge of a bluff where you can see Port Underwood, Cape Campbell and Cook Strait. Then along a bit more to cross the road to start the Loop Track, which was pretty steep but we just kept plodding away, and as I explained to Joy that breaking the tramp down into six sections worked for me. A welcome morning tea was had in the shade and before long we were at the next junction. There were other people on the track today, as well as two mountain bikers. This section (No 3) took us to the top, with the track in good condition, going through beech forest. After passing a rocky outcrop and emerging from the bush, Chris thought he was nearly there, but alas I knew there was about another 20 minutes yet. We arrived at the trig at 1195m around 12.30 for group photos where there is plenty of room, but most of the view is blocked by trees, and a platform wouldn’t go amiss.

Lunch was had in the shade and then it was a descent to the junction. We were passed by the two mountain bikers on the stony track going around the corner at pace, and Jo was impressed as this would have to be grade 5. Back to the junction to join the Loop Track to complete the other part of it (section 5) and treading very carefully as it was a steep descent. After what seemed ages we hit Port Underwood Road, then a small road bash to join the Whites Bay Track. This was nice zig-zagging through a pine plantation and the sound of people getting closer. We made it to the finish before 4pm with high-fives and no one was going to miss out on a well-deserved swim. The water was cool and lovely. The tramp was a challenge and I am proud to say that the group “cut the mustard” and would sleep well that night. The participants were: David (leader and scribe), Chris, Jo and Joy.