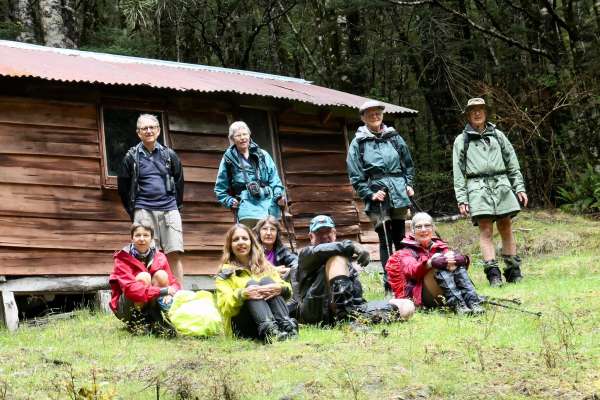 The weather forecast was looking very wet for Sunday (the date scheduled in the programme) but better for the Saturday. After much debate and checking of several websites, the leaders decided to change the day rather cancel the trip. Only eight were booked in which indicated that many had decided not to come after looking at the forecast. (Perhaps it pays to express interest with the leader in case the day is changed?) With one late extra we had nine people leaving Wakefield in two cars and drove up the Howard Valley with some light rain along the way.

Starting our tramp at 9.30am we walked up the Porika Road from the Howard camping area. With a ford near the start if we did the trip the usual way, we decided to walk in this anti-clockwise direction to keep our feet dry for as long as possible. However, a short distance up the road there was a stream crossing which caused some to get wet feet.

As you walk up the Porika Road there are many side roads which can be confusing but with the help of the map on a cell phone we made sure that we kept to the right route.

Part way up there was an interesting side track into a gold fossicking area along the Porika Stream and our map showed a track going along the stream and back up to the road i.e. a nice loop. (The DOC billboard more correctly showed the tracks only going to the stream.) We took the detour down to the stream and found interesting signs of past gold diggings but we found the track up the stream was unmarked, overgrown and a bit slow so after about 500m we headed off track through the attractive beech forest back to the road.

Some of the party stopped to admire a few very small spider orchids growing under the beech trees. The flowers are hidden under the small leaves and are not easy to see.

We continued up the road stopping for lunch where the walking track leaves the road and goes into the forest. It was not a good day for views and there was some light rain at this altitude.

After lunch we headed through the attractive beech forest down to Booths Cottage. Inside the cottage there were a couple of possums which got photographed. One was then caught and dispatched, while the other managed to escape.

Crossing a stream with an unstable bank on the far side caused some apprehension when a wall of boulders from old mine tailings crashed down around the trip leader. Fortunately no harm was done.

From the cottage the track goes past some huts used by gold fossickers and down through some pine forest to the road. Along the way a few patches of native clematis in flower were admired and photographed.

The ford near the cars was not as deep as expected but still ensured the group finished the tramp with wet feet.

Soon after we got in the cars the heavens opened releasing the predicted rain. Impeccable timing!