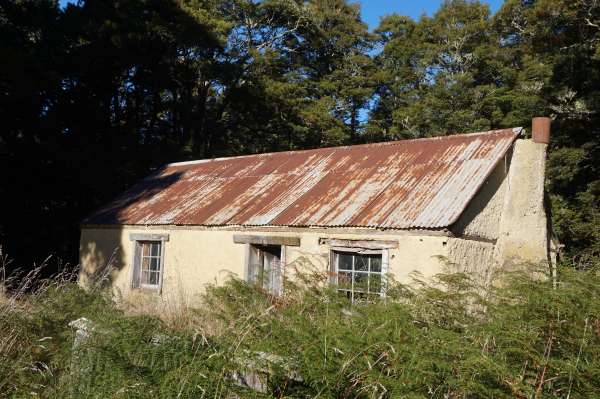 After a period of unusually warm weather, the possibility of a damp forecast was good news. Having expected heat, most of us made a prompt start at 8.30am, while Chris and Rob organised a vehicle at Red Hills carpark. As we expected, it wasn’t too long before they joined us. Since our last visit, the cycle track has been extended to run alongside the road, zigzagging across it at times. We enjoyed our morning tea break at the Maitland junction in the sunshine at precisely 10.00am.

Along the Maitland Ridge Track, Chris pointed out a good specimen of bright yellow slime fungus, which apparently can move a short distance. We reached the clearing too early for lunch, but paused to study the view as cloud was developing. A few alpine flowers were appearing, maybe in time they will colonise there more. Although we were able to cut across the zigzags of the cycle track, there are good patches of healthy undergrowth regenerating. It was time for lunch as we descended to the hut, but where? It would be a sin for us to sit on the extensive colony of small orchids, so we moved on. Maria found a great sheltered spot with rocks to sit on - perfect. Above us the red growth on some beech trees meant it felt like Christmas. The finer variety of clematis was flowering too.

Down at the hut, we met a young Czech girl doing some of Te Araroa, while Rob made the water tap hold the remaining water in the tank. On the way down Chris challenged us to find the diminutive mistletoe found only on the mineral belt. Only he could. We also saw a patch of greenhood orchids flowering, as well as odd specimens of celmisia, helichrysum and other orchids... We were back at the car soon after 3.00pm. The weather had been perfect and eight trampers made exactly two carloads of good company. The only disappointment was to see the broken windscreen glass and piles of human excrement around there...a security camera would be good and a toilet is required!

Chris, Jo, Maria, Rob, Donell, Lesley G, Marian W and Jocelyn were happy to be driven (or drive) back, with showers developing, to partake in Maria’s hospitality.