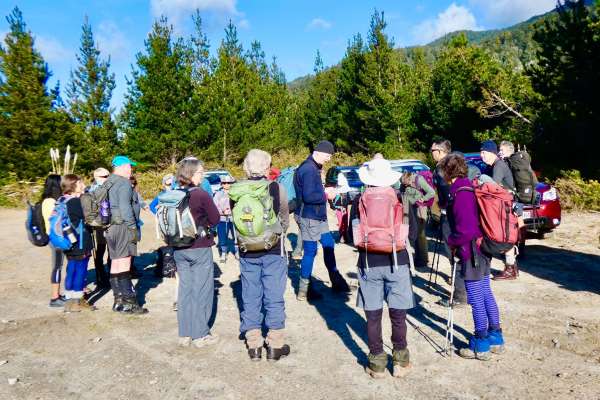 A large group of 27 trampers travelled up Motueka Valley Highway, across Alexander Bluffs Bridge then turned up Rocky River Road. We parked at an old skid site, good room for our six vehicles, 8km up the road, altogether 50 minutes from Richmond. We set off up a steeper section of road for a further kilometre, past a smaller parking area, then around a locked gate. Although a sign on the gate indicates private property, a previous sign states the road is a public access easement. It was a steady zigzagging climb as we emerged from bush with broad sweeping views of Tasman Bay below us. We had a break on the road beside a small old locked hut. The hut was used by Motueka men Frank and Aubrey Williams for their lodgings while grazing stock on their land in the area.

The summit was not yet in view because of a lower ridgeline as the steady-steep climb continued. We diverted off on a short side road up to some rock outcrops amongst bush with some small aerials and a small locked hut owned by Mount Campbell Communications. Originally the transmission equipment was all sited on this highpoint but now most have been relocated up to the summit. From here the road flattened briefly and emerged from the bush for the final half-hour steeper climb in a few wide zigzags to the 1,330m summit with its transmission tower, estimated at 100m tall. This had taken us 2½ hours in total.

The weather was fine, but a cold SW wind was blowing, so we sheltered beside the transmission buildings as we took in the spectacular views north across Tasman Bay and west to Golden Bay while enjoying or lunch. The day was busy with many other trampers also out enjoying the day. It was a quicker two-hour descent back to the cars to complete a good day’s walk to one of Nelson’s most prominent local peaks.