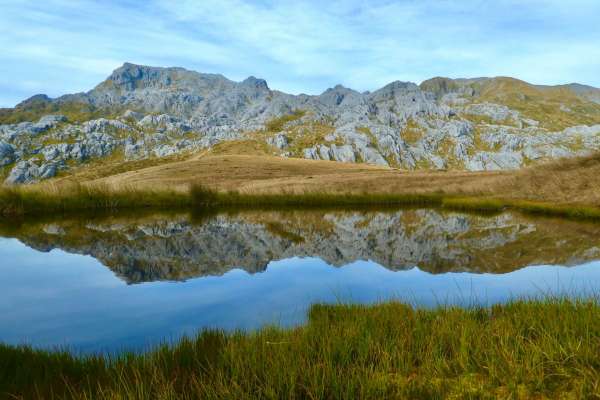 We approached via the ‘standard’ western route from Courthouse Flat on Friday morning. We launched immediately into a brutal slog up the Blue Creek Track, which is heavy on the beech trees and thus heavy on the wasps. We were happy to arrive sting-free at the junction with the parallel Ridge Track. The steepest bit over, we still continued to climb, but it wasn't until we were above the bushline and lunching under Billies Knob that we got any respite.

After lunch we did a short side-trip to an amazing lookout platform high above the valley we’d soon be travelling along. After all that climbing, it was galling to next lose 200m as we dropped steeply down The Staircase to the stunted forest of large tree daisies, dracophyllum and other Jurassic Park-like trees.

Passing under marble bluffs and the scant remains of an old prospector’s cottage, we then proceeded along the arid streambed of Blue Creek until we were spat out just a few hundred metres from the new (2009) 12-bunker Granity Pass Hut. Day one's activity was now complete, and it was time for some sun worshipping outside the hut.

We were woken early on Saturday morning by our hut-mates, so were underway smartly. From the hut a well-trodden track heads up old glacial moraine and through the open tussock of Sanctuary Basin to the saddle, with Sentinel Hill always to the east. Before long we were at the flats of the Hayfield with its picture-perfect tarns. Our cameras went into overdrive, capturing the Mt Owen massif towering over us in a clear blue sky and reflected crisply in the water.

The climb commenced again, and now we were in Lord of the Rings territory. We followed a cairned route that twisted and turned through a landscape of limestone karst littered with massive boulders, slabs, fissures, overhangs and sinkholes. Sometimes the cairns ahead disappeared or were in strange places, so some scrambling and route-finding ensued. It’s definitely not a route to be attempted in low visibility, let alone bad weather!

The alpine flowers also became more exotic and more prolific as we climbed. It was a day not to be hurried, and we didn’t, but all too soon we were emerging on the flat top of Mt Owen, about three hours after leaving the hut.

We wandered across to the biggest cairn at the summit trig, where we high-fived each other, made grand statements about Knocking The B*** Off, and admired the spectacular views across from and tiered below us - Tasman Bay, the Richmond Ranges, Nelson Lakes, Murchison, and vast expanses of Kahurangi.

We had an early lunch in a sheltered hollow, basking in the perfect conditions, and then reluctantly retraced our steps down through the limestone maze. Once at the tarns, we savoured the day and had an extended rest stop (snooze) in the sun, before resuming our downwards path back to Granity Pass Hut for the night.

And then on Sunday we shimmied back to the cars, this time taking the Ridge Track down to Courthouse Flat, and again happily staying wasp-sting-free. Expedition over. Everyone agreed that they’d thoroughly enjoyed themselves and that it had been a Most Wonderful Adventure.

We were: Diane, the Leader Chick; Marian, the Route-Finding Chick, Marie, the Sure-Footed Chick; Julie, the Botany Chick; and Deb, the Chick Chick.