An enjoyable and interesting long weekend 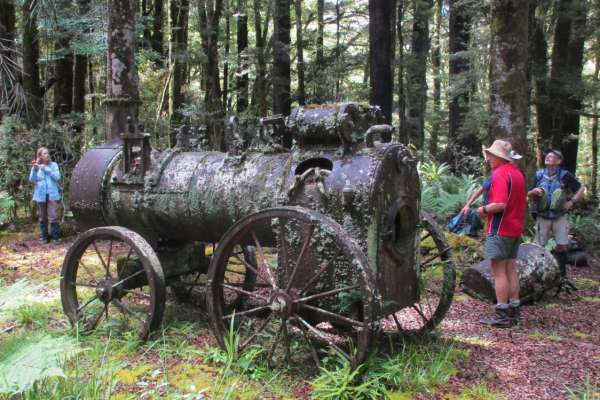 At midday on Thursday, eight trampers arrived at the Lake Brunner Country Motel & Holiday Park situated two kilometres north of the lake, all of us staying in cabins. In the afternoon we completed three short walks at the western end of Moana, close to the lakeside. The Velenski Walk was a brief 12 minute circuit with a small climb through beautiful podocarp forest including some towering rimu. Then it was across the Arnold River footbridge and along the Rakitane Walk close to the bank of the Arnold River, also through lush West Coast bush, with a loop at the end of the track then returning to the footbridge, taking 25 minutes. Next was the Lakeside Walk, which was no marked track, but just an easy stroll from the footbridge along the lakeshore past numerous people out relaxing and riding jet skis and sea biscuits. We reached the first side creek after 30 minutes then returned to the cars. Then we headed to the Arnold Dam Walk, 10km north of Moana and down a short side road. It was confusing searching for the start because of a few side roads that were not signposted, but we found the carpark close to the powerhouse. Heading right from the powerhouse we crossed a bridge over the Arnold River, beneath which was the pipeline running from the dam, but buried out of sight in the bridge structure. The track headed upstream then zigzagged uphill about 40m onto a terrace, soon coming to a lookout over a small lake in the river and the dam. The track did not head down to the dam but looped back to the bridge and powerhouse taking one hour altogether. It was impressive watching the powerful flow of water emerging from the powerhouse tailrace. A good finish on a fine, warm West Coast day.

On Friday it was cloudy with the possibility of the cloud burning off, so our plan was to climb Mt Te Kinga. We headed 4km south-east of Moana and turned off onto Cashmere Bay Road. At the end of the road we searched for the DOC sign for the Te Kinga Track, which we eventually found at the back of the carpark. It started at a steady gradient and we reached the first lookout over Iveagh Bay after 15 minutes. The track headed away from the lake to the second lookout after a further 35 minutes and the third lookout after another ten minutes. Both these lookouts had better views across to Moana on the other side of Lake Brunner. A DOC sign indicated that the track from here was for fit and experienced trampers, as the track became steeper and rougher with many tree roots in places. We went over a small spur then reached the fourth lookout. Climbing higher the gradient soon eased and the trees thinned out as we reached the bushline with the views opening up. From here it was quite scrubby mainly with turpentine scrub and a steady climb for a further 20 minutes to the 1196m highpoint and trig after nearly four hours. The true Te Kinga summit was much further on, but only eight metres higher at 1204m, but we were happy with our efforts. The cloud was just above us, so we still had grand views across Lake Brunner and the surrounding area. We returned to the bushline for lunch where Val was waiting for us, then it was three hours back down to the cars. A full day of tramping of nearly eight hours and steep and rugged in places but well rewarded with sweeping summit views.

On Saturday some overnight rain had cleared but with the cloud quite low, a valley walk was our best option. We headed 40km south of Moana to the Taipo Valley Track and our destination of Dillon Hut. We parked at a small carpark just off SH73 and headed off on an old 4WD road. We climbed about 150m to avoid a gorge then descended to river flats. Numerous small side creeks meant wet feet was unavoidable. We encountered a very boggy section where we decided to head up the riverbank which had a steep side. But we did find an easy enough way through this bog on our return later. As we were about to stop for a break, rain started so we found some shelter under some trees overlooking the river. The rain stopped soon after we started off again. We passed a section where the 4WD road had been washed out, but it was still easy enough to get past on foot. The old 4WD road entered a section of riverbed but with a trampers flood track higher up on the riverbank. We continued up the riverbed then soon had to cross a significant side creek then go along a gorse overgrown foot track. We regained the old 4WD road on river flats which made for quicker progress on the fairly wide valley. The last hurdle was the very wide stony riverbed of Seven Mile Creek. Some linked arms to cross the swift stream but then one person had a fall after steeping on loose rocks but was OK. Dillons Homestead Hut was a couple of minutes from the stream, then another five minutes to the newer Dillon Hut, taking us 3½ hours altogether. On our return we detoured slightly to view the derelict Seven Mile Creek Hut nearly out of sight from the main track. But we were surprised at the scene of an abandoned camp next to the old hut, including a car, house bus, van, caravan and tunnel house. We presume this was a goldmining camp, abandoned when the 4WD access was washed out in about 2018. We returned back to the cars in three hours with a little sunshine. Another full but interesting day.

Sunday was rainy but we did not miss out on any exercise as most of us headed to the Greymouth indoor pool to do some laps and soak in the hot pool. Val and Christine did some shopping, then we all met at Sevenpenny Café. The rain stopped mid-afternoon so we all did a walk around Moana town before heading to Hotel Lake Brunner for a very nice evening meal. Some interesting information panels in the town told us that the lake is 40 square kilometres in area (larger than Lake Rotoroa and Lake Rotoiti combined), 109m deep, and formed by glaciers 109,000 years ago.

On Monday we headed home, stopping in Reefton for an hour then it was on to the Larrys Creek Track. We turned off SH69, about 16km north of Reefton, just north of Larry River and along a 6km 4WD forestry road which was quite narrow and rough with many potholes. The easy track followed the bank of the Larry River, winding through nice beech forest reaching the historic Caledonian goldmine after about 35 minutes. We inspected the impressive old steam engine then had our lunch. Across the river was the quartz stamper battery but this involved a thigh-deep river crossing. Rob headed through the river but was disappointed no one followed him. We all soon re-united back on the same side of the river and headed back along the track to the start.