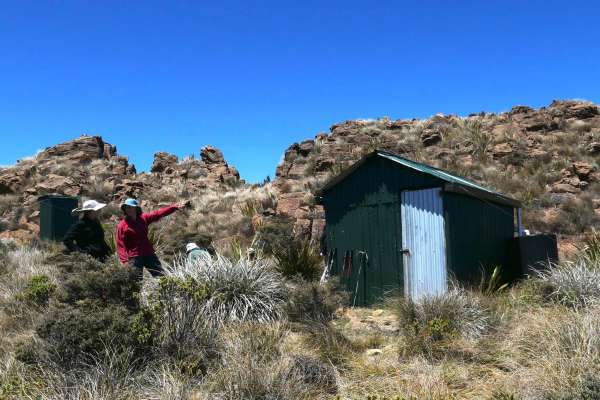 Dun Mountain is situated on the Bryant Range, is close to Nelson, over 1000 metres, not too steep a climb, a decent day out and with great views, so it ticks all the boxes. Originally we were going to Julius Summit but the weather that day was hit and miss, so seven participants left Maitai Dam carpark at 8:30am for our adventure.

It was a beautiful day as we ambled along the nice track with a light breeze and before long we reached the sign marked Maitai Caves. Our group took the left fork over a bridge and keeping together and at a steady pace, we started the climb. We soon found a spot off the track for our morning smoko. It was already fairly high up and photos were taken and some future trips planned.

Upwards and onwards the track opened up and our party reached another fork with Coppermine Saddle on the right and Dun Saddle to the left, so the gang went left and finally reached Dun Saddle. There are quite a few signposts here. The wind really hit us, blowing hats off, shoving some in sideways directions, but we are made of stern stuff and never gave a thought to quit, so the left arrow was our destination.

The first part is steep and follows red marker poles, but we kept together, then after about 20 minutes it flattened out somewhat. This part was the best because you get views of the Tasman Bay and the ranges on the other side. It was a very rocky track but soon all of us made it to Dun Shelter. Looking for a place out of the wind, we agreed to first walk to the summit (1129 metres), then have lunch at the shelter. So at about 1pm we knocked it off, then had a bit of a walk around and more photos, but because of the wind we didn’t want to hang around too long. If you carried on you would walk to Little Twin and eventually Maungatapu Saddle.

After lunch it was back the same way, but I always feel you can see things differently on the way back. After negotiating the steep descent to the saddle we just wanted to keep going and get out of the wind. Once getting through that, it was a nice and relaxing, mostly downhill to the finish. We came across a couple of trampers intending to stay at Rocks Hut, a few mountain bikers (not surprising as this is a shared pathway), who were watching out for trampers and very polite and finally back to the cars around 4pm.

We had walked nearly 8 hours, had great conversation and banter, did a distance of around 21km and I was the only fella with this group of lovely ladies. Well done everyone!