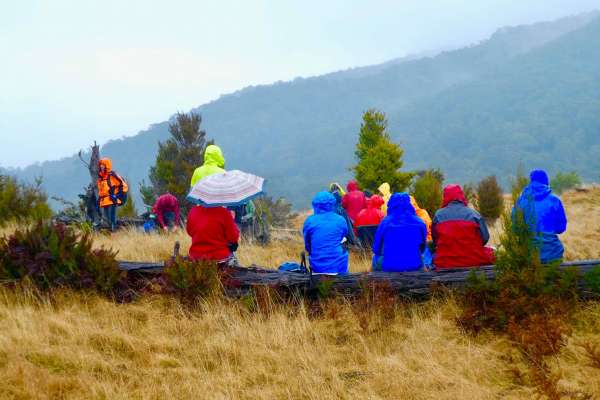 On a grey winter’s morning twenty six trampers, including five non-members, departed Richmond bound for the Canaan carpark.  We walked in light drizzly rain up to Wainui Saddle where we stopped for a rather late morning tea and then continued on to Moa Park Shelter for lunch. The old Mt Evans track leaves the main Inland Abel Tasman Track just above the stream crossing to the west of the shelter. Although not maintained and with an unusual “no-walking” sign near the start the track is relatively easy to follow with numerous historic orange tin-lid markers. The terrain is not at all rugged and the forest very interesting with large old trees and occasional kaikawaka (New Zealand Cedar) standing very straight and tall.

We followed the track along a broad ridge with a short stop for those keen to get a view from the rocky “summit”. Phones indicated that the true summit was another 100m to the north but this was not checked out. We managed to keep the large group together and, once at the edge of the forest stopped for another break. There is a route from here to the southwest along the range and coming out near the saddle on the Canaan Road, but we chose to head more directly across the farmland and back to the cars. There are several route options to the carpark and it would be easy to take a much longer route than necessary. The group completed the circuit in just on six hours, including breaks.

We did think about splitting this large group into two but this would need to be planned beforehand and we did not have enough leaders with a good knowledge of this track or know the exact capabilities of all the participants. There would be the additional problem of making sure that members of each group were in the same group of cars. Another option would be to have the same trip on both Saturday and Sunday with separate leaders.