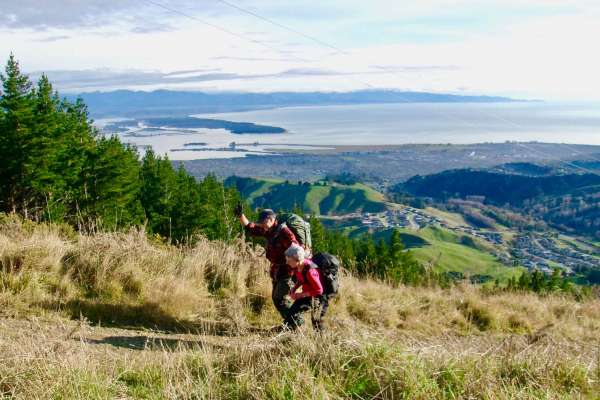 Twelve keen participants met at the end of Marsden Valley Road at 9am in what turned out to be a sunny day. The group split into two with Julian taking six people up the Involution Track and I took six up the Barnicoat Walkway with the idea that the two parties would meet at Involution Corner around the same time. Barnicoat is a steep workout but the group plodded along looking back occasionally for great views of the coast, and the Grampians. Just under an hour to the top, morning tea and a well-earned rest – the hardest part done.

Continuing along the Barnicoat Range we met with the other group already at the corner having a break. Our goal was to do a side trail to Jenkins Hill so now we were in the bush, the track reasonably dry though, bird life abundant and before long we were at the Brook Sanctuary predator fence which is impressive. A little bit further along Rob had caught us up. At the start of the day 20 minutes into Barnicoat Track he decided to go back to the cars and then just catch us up, putting the foot down. Anyway we all got to Jenkins Hill for lunch, where there was a bit of stand-off between a falcon and a tui in the trees.

Back the same way to Involution Corner and along Widdershins Track, the bush opens up towards the end but it was now starting to cloud over. We ambled along Glider Road to the hang-gliding spot, again with great views and well worth lingering about, with no wind. The last part was steady, continuing down Glider Road where we noticed more mountain-bikers, walkers and dogs, reaching the end shortly before 3pm. It was quite an easy day but enough to know one earned their dinner.