A big turnout for a long flat course 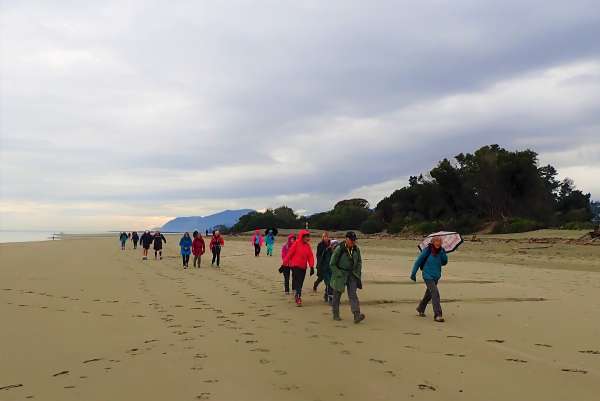 There were a few who thought we might underhandedly try to slip in the dreaded Boulder Bank walk - until we pointed out there was no cafe on the Boulder Bank, resulting in great sighs of relief.

By Monday we had a dozen on the list. “Where are we going?“ - It’s a mystery.  “Where are we meeting?“ - We’ll tell you Friday morning. By Friday morning the buzz was getting louder and we had 24 signed up. The biggest turnout in about 10 years! We then revealed Saturday morning’s meeting place and time near the Tahuna Beach campground, with the warning - Don’t be late!

Saturday rolled along and at 8.30 on the dot, we headed off. First off, a romp down Tahuna Beach, followed by the Dog Walking Beach, then ever westwards along the coast, towards and then past the golf course. Being low tide (why we had to be strict in our departure time) we kept dry feet by staying close to the sea, and about 45 minutes after setting off we popped up the broken sea wall onto the Airport Perimeter Track.

Then it was anticlockwise around the APT to the main airport gates, before bounding over the bridge onto the Great Taste Trail. A very welcome morning tea stop was had at Monaco Reserve, and then at 10.30 we were back pounding the pavement.

Passing the Honest Lawyer - no, we don’t have time for a coffee (or pint!) - we then had a noisy walk on the trail shadowing the Whakatu Highway. We passed under the highway at Orphanage Stream and finally started heading back east, enjoying the peace of the leafy Railway Reserve.

At Songer Street we turned left, crossed the Whakatu Highway on the overbridge, and voila!, we were back at the Honest Lawyer. Some walkers longingly eyed the garden bar, but we kept the blinkers on and retraced our earlier route back to the airport.

A road bash along Bolt Road, a dogleg through Golf Haven Drive to take us onto a quiet back street, then we were on Parker Road and back up to the coast at Parkers Cove. Enthusiasm was flagging and feet were lagging, but we encouraged them ‘Almost there!’, ‘Lunch soon!'

The last wee section of the circuit was on sealed walking path around the Back Beach coast and a nice new section of boardwalk around the campground ... and in the distance there are our cars. But wait up - turn right into the campground and the most excellent Dulseas Diner is beckoning, having been prewarned to expect a large hungry group at 1pm. And it was 1 on the dot.

Even though the walk was absolutely dead flat, we were very happy to take the weight off sore feet. We had clocked up a very respectable 19km. It was suggested we do a quick lap around the campground to crack the 20, but this was met with some horror and poorly veiled threats, so with the troops revolting we instead plonked ourselves down and tucked into our meals.