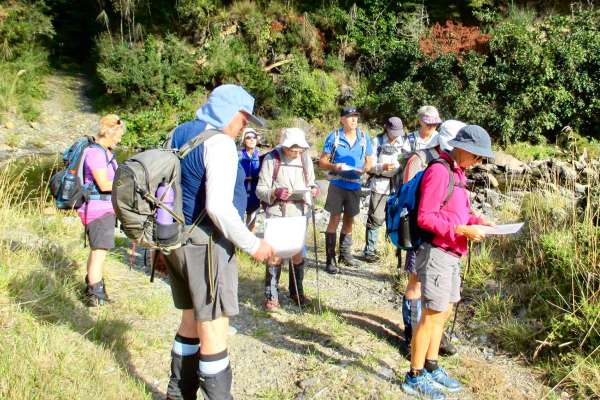 Location awareness was the special focus of this trip. Pete had us locate ourselves on our map at the Roding carpark, showing us how to orient it from prominent features. Map in hand, we followed the 4-wheel drive track, stopping frequently as Pete related terrain features to the map or asked us where we were. Estimating distances and predicting when things would appear was a fun challenge. What happened to that stream? It went through a culvert! We noted a spur we would later descend on our return.

At the smelter site we enjoyed morning tea while Julian outlined the interesting history of the mining operations. Then we ascended a tramway on the true right of the United Stream to the crossing point before the ascent to the United Mine. Here the party split into two, some ascending the steeper mullock (broken rock from mining operations) and climbing to the top of the ridge for lunch before descending through beech forest to the Champion Mine. The others retraced their steps to the smelter then followed a bush tramway directly to the Champion Mine, arriving shortly before the mullockers. After a look round it was time to go back.

Botanising, chatting or enjoying the scenery, we gently descended the tramway before meeting the signposted shortcut to the Roding River. As a final challenge Pete had us identify our position as this track was not shown on the map. After crossing the Roding, it was a gentle stroll back to the cars to complete a very enjoyable and informative 6.5 hour tramp. Special thanks to Pete and Julian.