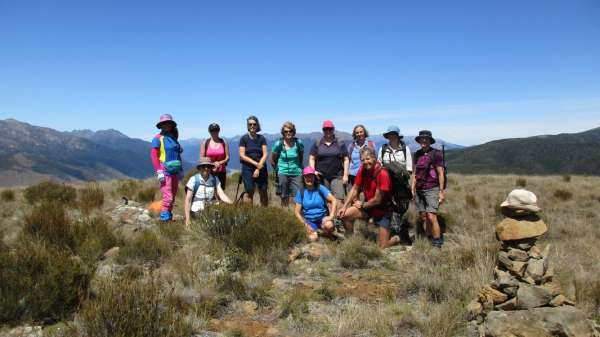 We left the Richmond carpark at 7.30am and drove to the Red Hills carpark with a brief pick-up and car swap in Wakefield. The weather forecast was looking good, perhaps even a bit on the hot side. We were ready to start our day tramp by 8.45am. There were quite a few new people among the twelve trampers (New Year’s resolutions?) and the easy start of the track gave plenty of opportunity to talk with each other. The stream at the beginning of the track was low and crossing had been made even easier with a tailor-made tree trunk across the water.

We followed the ‘steeper grade’ mountain bike track that became the four-wheel drive track after passing the old cottage. Just after 10am we got the first views over the Wairau Valley which made a good morning tea stop. The track to the hut is a steady climb and passes through regenerating forest with views over the valley.

We arrived at the hut at 10.45 and had a brief stop before heading to the plateau. The track comes quickly out of the bush and follows a vague track through the tussocks and scrubs. The terrain was very dry which made it easy going but it could probably be quite muddy after rain. There was the occasional cairn and thanks to Robert there are now pink ribbons at regular intervals to make it a lot easier to find your way. We were at the plateau just before noon and took in the breath-taking views in all directions, from Mount Arthur range in the west, along the Richmond Ranges, to Cloudy Bay in the east, the Inland Kaikoura Range and closer-by the Raglan Range, St Arnaud Range and Mt Robert.

Ding-dongs went and we spent a leisurely hour lunch time, wandering over to the trig before descending back to find our now well-marked track.

Back at the hut it was busy with TA walkers, as January is peak-season for the Richmond Ranges for those walkers who want to finish at Bluff before winter starts. It was hot on our return and we were pleased to get back under the canopy. Another brief stop at the cottage, but a good look around was hindered by large swarms of bees around the hives. We returned at the carpark just after 4pm.