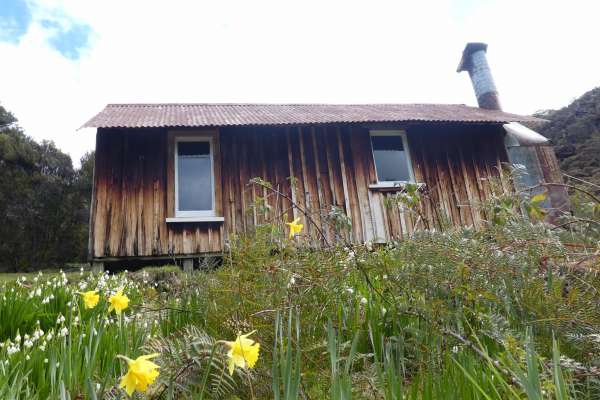 It was five years since the club had done this crossover trip, so it was high time to do this trip again. On a partly cloudy day we had a good turnout of 18 trampers, of which eight left from the Asbestos Track carpark on the Cobb Dam Road, while ten started from the Flora carpark, at the end of the Graham Valley Road. The Asbestos group set off at a good pace on the mostly wide track, arriving at the abandoned asbestos mine after one hour. We viewed a few assembled mining relics beside the track and peered down into the barren open pit mine, trying to imagine the toils that the miners endured. About 5,000 tonnes of ore was removed for pipe manufacture between 1949 and 1963, before it became uneconomic to continue. Then it was a further half-hour rock hop to Asbestos Cottage, 200 metres higher, where we stopped for morning tea in sunshine beside the hut. The cute cottage was home to the reclusive Henry and Annie Chaffey for 40 years. After a further half-hour we reached the Bullock Track junction just above the Takaka River, just as the Flora group arrived. Here we exchanged car keys and enjoyed our lunch.

We continued on in quick time to the Upper Junction and along the Flora Track, past Gridiron Shelter to Flora Hut for a brief stop. The final drag was up Flora Saddle and down to Flora carpark to complete a seven hour day for our group. The group of ten that started from the Flora end had morning tea at Gridiron and afternoon tea at Asbestos Cottage and had a 7½ hour day, perhaps a little more leisurely than the Asbestos group. Overall a satisfying Kahurangi traverse.

The trip needed thorough planning to try to limit the confusion for the leader and the participants at the meeting point on the day. Drivers were emailed the previous day with the details of the different car that they were driving to the start of the tramp, along with the names of their passengers. To save time on the day, each person was given a piece of paper with the direction that they were tramping and the details of the different cars that they were starting in and returning in. These instructions seemed to avoid any gear left behind in the wrong vehicle, which easily occurs on crossover trips.