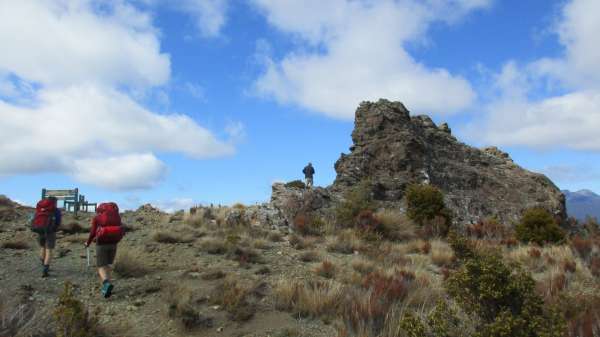 A curious fact is that Rocks Hut is about 12 kilometres in a direct line from Nelson city centre, the closest DOC backcountry hut to any city in New Zealand, very convenient for Nelson trampers.

Nine people met by the Prince Albert Hotel and exchanged cars, with Alison’s group of four starting from the Brook Valley and Robert’s group of five beginning from the Maitai Dam. The five heading up the Maitai on the Dun Mountain Trail encountered some track work at about halfway, which when completed, will give a good surface all the way along the bike trail. But we detoured off the smooth main track and up the very rocky track to Dun Saddle where we enjoyed lunch and the view across to the Richmond Range. From here it was a descent of one hour to the hut, including an area of the unique barren red landscape of the mineral belt, also a section of tricky tree roots before the hut. Before the Brook group arrived, some firewood was gathered and there was a visit to the lookout above the hut. The Maitai group had taken five hours from the Maitai Dam while the Brook group had a long day of eight hours from the start of Brook Street. That night we shared the hut with just two Nelson woman.

On Sunday we completed a triple crossover with Eric and Esther heading away first, traversing Dun Mountain and Little Twin, then descending past Dew Lakes and the Rush Pool to the Maitai Dam, taking 6¼ hours - certainly a good direction to do this traverse. The rest of the group climbed up to Dun Saddle from where Robert, Alison and Sue went up to Dun Shelter and Dun Mountain while the others waited for 1¼ hours. After regrouping, both parties carried on and completed each crossover. Alison’s group of four went down the Maitai and had a relaxed trip taking four hours from the saddle while Robert’s group of three headed down the main trail at a quick pace past Third House all the way to the start of Brook Street, taking 4½ hours from the saddle.

The Maitai group was Robert (scribe), Julie, Sue J, Eric and Esther, while the Brook group was Alison, Ken L, Jo and Lesley G. It was pleasing to achieve a nice crossover in a great area so close to home, especially on a fine weekend.