Exploring the heart of the "Quartzopolis Goldfields” 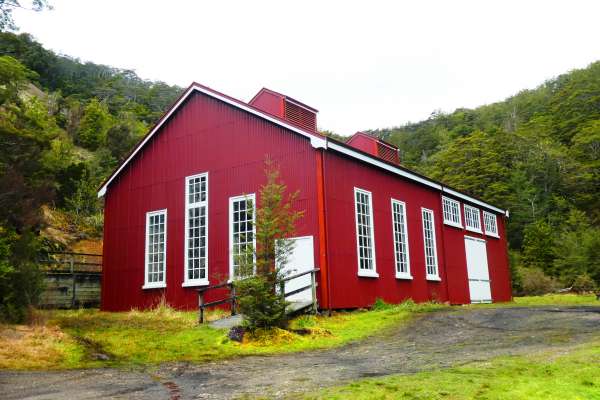 25kms drive from Reefton is the abandoned gold mining town of Waiuta, home to 600 people in its 1930’s hey-day.  The town is a history-drenched treasure trove of restored buildings and information boards, but we had a smaller, more remote, objective in our sights.

From Pro Road in Waiuta, we shouldered our packs and followed the sign for Big River along a gentle well-benched track. There were short side detours to the St George and Big River South mines, but they’re a non-event, nature having totally encroached on the sites long ago. After about three and a half hours walk-time the spacious 20-bunk DOC hut at Big River was reached. This superbly located hut is perched on a small hill above the scant remnants of the Big River settlement in the clearing below.

Big River was once a thriving gold mining town (1882-1942), with a population of about 100 people at its zenith. The mine was small but one of the richest in terms of returns to shareholder, producing 100,000 ounces of gold. Nowadays the few remains of the isolated township, two derelict cottages, nestle on the banks of the river alongside the rusting remnants of cyanide tanks and a dilapidated stamper battery and cableway.

A short distance away in a series of clearings in the forest are an impressive assortment of historical relics.  First up for fossicking around in is Tin Town, the single miners’ huts. Crumbling brick chimneys and twisted iron are all that now remain of the town.

Then there’s the massive reconstructed bright red Engine House, containing the restored winding engine. It is the only steam winder left in New Zealand with its boiler intact. The engine house was the control hub for operations in the mine shaft. The steam driven winding engine lowered men and equipment into the mine and raised the gold-bearing quartz that was blasted from the underground reefs.

Carry on up the hill, and you reach the Poppet Head.This impressive 12m structure stands over a 602m deep shaft. Ore was hoisted up the shaft and stored in bins to be processed. Waste rock was dumped nearby creating the mullock heap. The Reefton goldfields were once abundant with such structures. Today this poppet head is the only surviving original on the West Coast and one of only two left in New Zealand.

There are also other further-afield sites to explore. Head off on the well-maintained tramping track towards Inangahua, and after about three hours or so the restored Golden Lead Stamper Battery is reached at Deep Creek. This battery is one of the most intact and best-preserved in the region. A warning however - there’s a big hill to go down to reach it, and a long long climb back up. The battery is an impressive specimen though, and worth the extra effort to reach. En route to it is the derelict sawmill, and there’s sections of old tram tracks to walk along too.

One hour from the hut in the opposite direction are the remains of the Big River Dam. The river here is a rich red colour, deeply stained by the tannins in the water. Numerous sun-whitened timbers jut out like sharp teeth, vertically from the river and horizontally from the river bank. It’s a good option for those with an appetite for a shorter tramp, and is through mostly open terrain.

There are three routes in to Big River Hut. There is our route, which is an easy tramping or advanced mountain-bike track from Waiuta. There’s the longer tramping route from Inangahua (at the far end, past Golden Lead, the wet-weather route is closed and the dry-weather route plagued by windthrow). And then there’s a technical 4WD road from Reefton. On Saturday night a group of  young people in 4WD vehicles pitched their tents up at the Engine House. Two mountain-bikers did however join us in the hut, but we had it to ourselves on Sunday, no doubt due to a pretty horrible weather forecast for the latter part of the weekend.

Three days at Big River was a lovely leisurely way to spend Labour Weekend. Saturday was a perfect ‘bluebird weather’ day, spent driving to Reefton, walking in, then lazing around in the sun and exploring the old settlement. On Sunday the group split up, with long, short and very-short options available according to one’s appetite for exercise. Heavy rain which started late on Sunday afternoon fizzled out on Monday about 8am, so by the time we backtracked to Waiuta it was a no-coats-required day. A late-lunch stop in Reefton was a welcome final-hurrah to the weekend, before heading homeward bound.