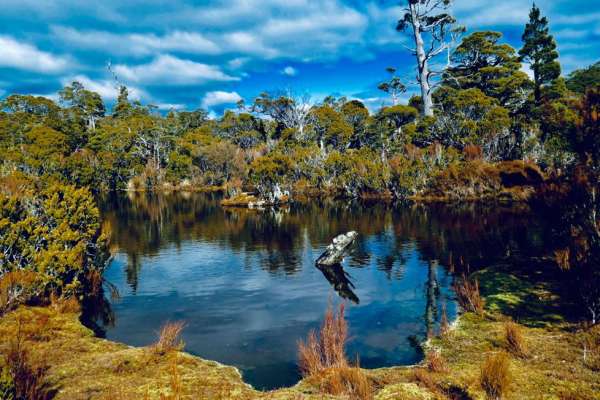 Knowing it was a long day we made an early start, meeting at the Botanics Reserve at 7:30am. A record number of 19 trampers turned up. From the carpark just below the Maitai Dam we headed uphill through a block of recently felled pine forest stopping briefly at the Rush Pools then again at the Maori Argillite Quarry. Here we inspected a rock shelter that many of us didn’t know about and found that it had recently been used. With a strong cold wind blowing we stopped for morning tea in the shelter of some trees. As the track continued uphill through mineral belt scrub and beech forest, it became rougher and in places it felt as though we were walking through a creek bed.

At Dew Lakes, or more aptly described Dew Ponds, some of the party went across the swampy ground to the west to reach the view point looking towards snow-capped Mt Tapuae-o-Uenuku. Some seemed to have trouble finding their way back but were soon directed by loud voices back to the track. We stopped at the Maungatapu summit (1014m) for a view of the Maitai catchment and once down the steep ridge off this high point we found a sheltered, but sunny spot for lunch. The track took a few more ups and downs before we reached Maungatapu Saddle.

The walk from the saddle along a non-maintained 4WD road seemed pretty long at the end of the day. The total time for the trip was as planned, just on eight hours. Those participating were: Di, Julian, Colin, Sue, Esther, Eric, Joy, Rob, Maria, Julie, David W, Pete, Marian, Chris, Jo (scribe) and visitors Dan, Duncan, Paula, and Ross.