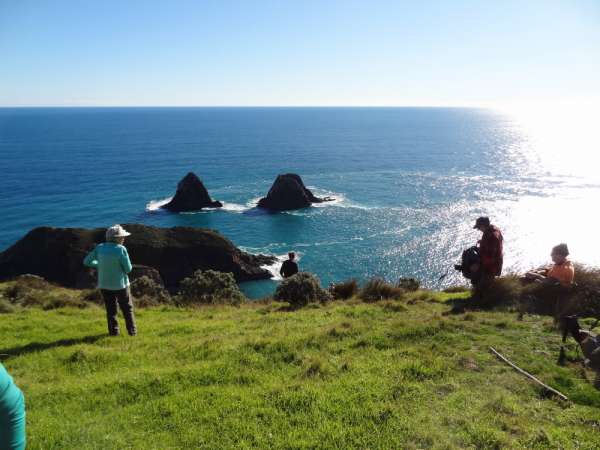 We assembled at the Wakapuaka Cemetery entrance in the dark so that we could make an early start on the long and winding road to French Pass. We had four vehicles booked on the ferry at 10am. The weather was changeable with threatening skies, but it was mainly fine all the way to the pass but a little cold. The ferry arrived dead on time and our vehicles were transported two-at-a-time to the Kapowai landing site. Quite a calm ride considering the sky. From there we drove up the island’s gravel, but well maintained road through the quite distinctive bush cover up to the main ridgeline to the community hall, our lodgings for the weekend.

After settling in we made our way back to a quarry site with a carpark and bush bashed up a ridgeline to reach the highest peak on D’Urville Island called Takapotaka or Attempt Hill at 729m. The bush is quite open because of deer grazing so it was not that difficult. There were lots of snail shells so there is possibly a good population of them. At the top of Takapotaka/Attempt Hill is a communications tower and quite good views. It was getting cold so we did not linger long and set off along the ridgeline to another vantage point that had views to down to Greville Harbour. The wind and rain was beginning to intensify so we headed down, picking up a marked track that eventually dropped us back to the main road and a short walk back to our vehicles. From there we went back to the community hall and a warm drink by the fire while Jeff, Ian and Andrew went out and cut a track to a high point that overlooked the hall.

The weather next morning was perfect, with cloudless sky and still conditions. We got into our vehicles and set off up the main road, stopping near Mt Ears at 463m to take in the stunning views out to Port Hardy to the west and out to the Rangitoto Islands to the east. From then on the road became quite twisty and steep. The landscape changed too as we were travelling on very clear steep but high quality hill country farmland. The road was benched into the hill with some very big drops on one side. It was not a good idea to look over the side. It was quite a drive to our destination Patuki Station. We arrived at 10am and were greeted by Gus and Rebecca Forgen, the station owners. They are very charming people and we had a look around the homestead met the station dogs and admired the beach where barges load and unload everything then comes to the farm. They gave us a map and we drove back up to the ridgeline and parked up then set off on foot to Cape Stephens. It was quite a walk over very clean but quite steep hill country farmland. The views out to sea were stunning. The sky was so clear and the sea below was so calm. We reached the end of the island (Cape Stephens) about 1pm. A stunning place to have lunch with spectacular views of Flat Rocks, Saddle Rocks and Stephens Island (Takapourewa).

On our way back we dropped down to a very spectacular beach with a huge sand drift that went from the beach several hundred meters up a steep gully. It is a stunning beach with something for everyone, black sand, lovely surf, stunning rocky caves and lots of mussel buoys (a delight to one of us). From the beach we made our way back to our cars and then a long drive back to the hall with a brief stop to climb to the top of Mt Ears to catch the last of the sun.

Next morning we had to be at Kapowai Bay by 10am so there was little time to do much though we did all manage to admire the track that Jeff, Ian and Andrew had cut on a high spot just above the hall. The crossing was very calm. We stopped at Okiwi Bay on the way home and took in the view from the top of Goat Hill.