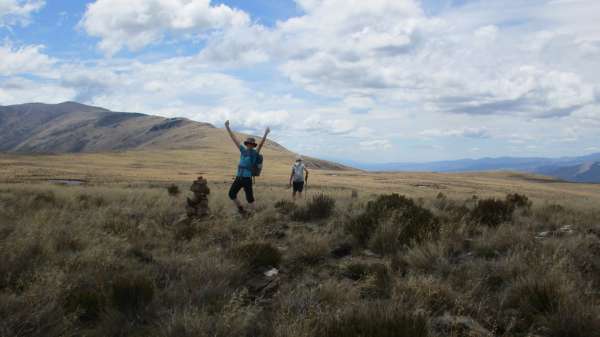 We assembled in Richmond at 8am and made our way to Red Hills carpark. There was some parking difficulty because of some thoughtless parking but we managed to squeeze in. Then we began with careful negotiation of the creek for those who did not want to continue with wet footwear for the rest of the journey.

We quickly came onto a newly constructed bike track which we followed with some interest. It had better grades with more zigzags and although slightly longer, got us to the old cob two-roomed cottage and the rapidly deteriorating old weatherboard house we understand was the original homestead of the Rainbow Run. We visited the cob cottage to marvel at the pioneering spirit of those times. The cottage is fenced off, but vegetation is now up to window sills, however the building itself is in remarkable shape. We did visit the weatherboard house which is declining much more rapidly, perhaps because stock have been using it as a shelter. A huge number of beehives were in this location but they were no trouble.

From there we began the ascent up the old four wheel drive track to the Red Hills Hut. It is a steady climb of about 400 metres through quite tall regeneration with odd patches of bush and excellent views out to the Wairau Valley. We arrived at the hut and decided to push on up to the summit of the plateau at 1160 metres. There is only vague track markings with the odd cairn. Underfoot it’s quite difficult going, through small scrub, rocks and very uneven ground, but most of us made the top for lunch and the magnificent views northwards. We were lucky that it was quite dry which did make it a bit easier. From there it was all downhill to the hut, with a bit of difficulty following the track down. Manuka was in full bloom everywhere and was quite a sight. From the hut we came down the track and arrived at the carpark close to 4pm. Some of the party followed the old track to compare the time with the new cycleway track. The difference in time was only a couple of minutes with the old walking track being shorter but a lot steeper.