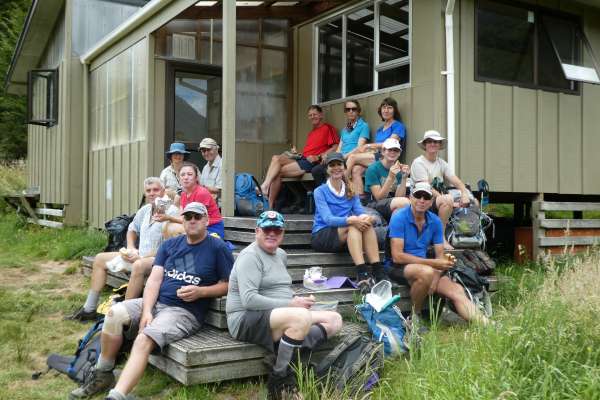 The first Sunday tramp for 2019 attracted 14 starters keen to burn off some excess calories from their Xmas and New Year indulgences.

We left Richmond early and motored up to St Arnaud where a car was strategically deposited at Kerr Bay. We then headed around to West Bay and up the Mt Robert Road to start the day through the lush beech forest of the Lakeside Track.

First stop was morning tea at Whisky Falls, a sparkling 40m cascade surrounded by moss and ferns. We then continued hugging the lake and moseyed along to Coldwater Hut, superbly situated with the jetty right at its front door step. Next it was out of the trees and into expansive river flats with great views up the Travers Valley. It was compulsory wet feet for all as we crossed the wide but shallow Travers River, forsaking the winter alternative of an additional hour-plus detour up to the swingbridge.

A short jaunt across the flats and it was now fortuitously lunchtime, enjoyed on the deck of Lakehead Hut. Time to change direction, and the afternoon’s walk was along the other side of the lake on the Lakehead Track. Even the non-botanists were impressed by the abundance of red mistletoe dripping from the beech forest. Afternoon tea time coincided nicely with a sunny shingle beach, where a hardy few were tempted to take a dip.

Seven hours from starting walking, and we popped out at Kerr Bay. The cars had been shuttled there from West Bay by the drivers who had forged ahead of the main group. This saved us the somewhat tedious link walk back to the start. A very enjoyable day was then rounded out perfectly by an ice cream from the St Arnaud shop.