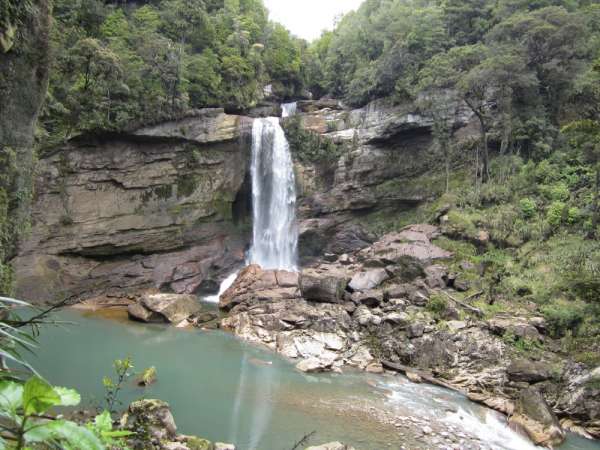 Four keen trampers left sunny Nelson over New Year to explore some of the walks and tracks in the Westport area.  We arrived on the Saturday afternoon at the Westport Holiday Park and quickly settled into our comfortable chalet accommodation. Then, it was off to view the lighthouse and seal colony at Cape Foulwind, 16km west of Westport. This was easy walking along a 3.5km cliff track from the lighthouse car park and down to the beach at Tauranga Bay. The walk there and back took three hours, including time to read the informative signs along the way and (despite the smell) viewing the rare NZ Fur seal breeding colony on the rocks below. With an ominous looking rain front coming up from the south it was then time to drive back to Westport.

Sunday morning dawned misty with low cloud after overnight rain, and so we had an uncertain weather forecast for our planned trip up Mt William, a high spot above the Denniston Plateau. Instead we opted for a five hour, 14km return walk along the historic Charming Creek Walkway. We started at the Ngakawau end, 35km north of Westport. The well-formed and maintained route followed a historic bush tramway, with many interesting relics relating to past coal mining and transportation activity. Of note during the walk was the narrow boulder strewn Ngakawau Gorge and then, after one hour, impressive views of the Mangatini Falls including from a very long suspension bridge. Once through a long and very dark tunnel, the walkway continued through bush that became more open due to past logging and sawmilling activity. After passing Mumm’s sawmill, we stopped for lunch at the Charming Creek coal mine site, which is close to the car park at the Seddonville end of the walkway. Returning back to Ngakawau the same way, we recuperated with ice cream and then on our return to Westport we had time for a detour up the winding road up onto the Denniston plateau. We had ample time to view the historical artefacts with their excellent information panels, and take in the magnificent vista out to the coast from the Denniston Incline Brakehead lookout.

On Monday morning, a humid westerly airflow continued to maintain a low cloud base so we decided to visit the Westport i-Site for advice on the local weather and our best walk options for the day. We were also concerned by a warning sign we saw that said the Denniston Bridle Path track was closed and too dangerous due to slips. However, we were reassured by the helpful lady at the i-Site that the Bridle Path, although challenging, was still doable if we were brave. She also recommended that we walk the Argyle Track near Charleston. So after a stop for a beach walk and coffee at Tauranga Bay, we headed south. We found the hard-to-spot sign for the Argyle Track 1.5km out of Charleston and just past the start of the unsealed portion of Darkies Terrace Road. The tramping track took us six hours return and was mainly in the bush. It initially followed the old water races from Argyle Creek that were built for gold mining but still in a good state. There were also some very deep and exposed mine workings, before the track eventually climbed up and through country with interesting views of the coast and various limestone outcrops. Overall, the track was well marked but looked to be infrequently maintained with some areas becoming overgrown with gorse and manuka. However, we saw lots of the mauve sun orchid Thelymitra flowering on the edge of the track we spotted a beautiful 40cm high Orthoceras with its reddish-brown flowers. Towards the end, the track went through three long and muddy tunnels with low headroom, so a torch app on the mobile phone proved useful. Also, in some places the track was steep and slippery, and DOC warning signs suggested people may have had problems in the past. Nevertheless overall, it was an enjoyable if rather tiring tramp.

On Tuesday morning, the sun shone early despite light night-time rain. Unfortunately though, the sun faded and mist soon descended, so we decided to finally forgo any Mt William ascent into the clouds and instead tackled the 4.2km Denniston Bridle Path track. So we drove to Waimangaroa, 18km north of Westport, and started walking from the Conns Creek Road car park. It took two and a half hours to reach the Brakehead viewpoint that we had driven up to on the Sunday. The upper section of the track had certainly suffered extensive damage from slips in November, and the largest slip needed quite an effort and some stretching to get over. But after lunch at the top, it took us just over two hours to come down. This was despite a short ten minute side trip to visit the Middle Brakehead lookout. Once back at the cars, we drove up to the end of Conns Creek Road for our final view of the Denniston Incline, this time from the very bottom. Just like at the top of the Incline, some of the original equipment was well preserved since operations closed in 1967. And then, it was back to the campground to get ready for a last night dinner at the aptly named “Denniston Dog”.

On Wednesday morning, we left Westport in sunshine, stopping for lunch in a very hot Murchison, but with time to take in the views from the Skyline Walkway lookout.

Thanks to all the ladies (Lesley G, Julie and Val) for the organisation, the company and the adventure.

Ron (the driver and scribe).