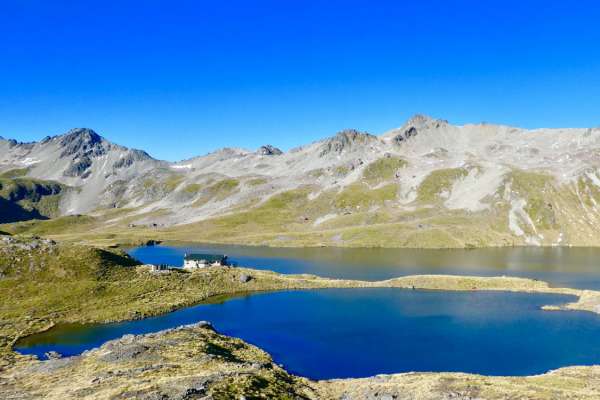 Everyone who was busy with Xmas busy-ness missed out on an awesome weekend to Angelus Hut.

For a start, it was The Best weekend weather for quite some time. A small amount of high cloud on Saturday produced some amazing formations, including impressive flying saucers, whereas Sunday was almost cloudless. After initial beech forest from the carpark up the Pinchgut Track to Relax Shelter, the track then follows the Robert Ridge far above the bushline. Your feet follow the well-trodden route through both stark open expanses and towering rocky pillars, with views of mountains marching far off into the distance. An early-summer dump of snow two days previously had almost melted away, but a few residual smatterings in sheltered spots added to the beauty of the vistas.

As always, the view from the ridgeline looking down into the basin containing Lake Angelus and Angelus Hut was breath-taking. Later a walk towards Sunset Saddle meandered through beautiful alpine meadows, and this was followed by relaxation time on the large sun-soaked deck of the fully-booked-out hut.

The highlight of the weekend was getting up super-early on Sunday to catch the magnificent 5.45am sunrise over the lake. It’s times like this that epitomise why we head into the mountains, and why Angelus is one of the most popular huts in the Nelson Lakes National Park.

We were (quality not quantity!) a party of two: Diane (leader and scribe) and Deb.