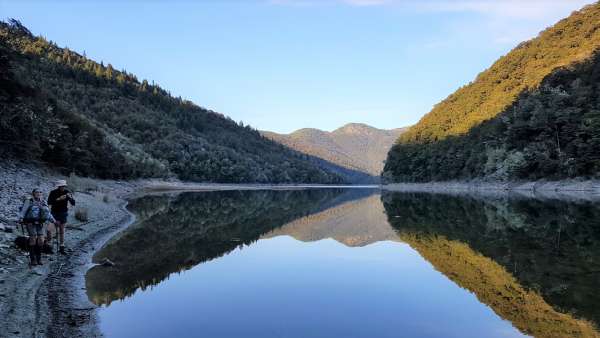 Eight of us set off from Richmond in two vehicles at 8am on Saturday morning and drove for just over three hours to reach the Lake Chalice carpark. This did include a stop to enjoy the short walk to Enchanted Lookout. With the dry conditions it was a very dusty drive for 22km along Staircase Road. From the carpark it took us 40 minutes to walk down the wide track, through thickets of wilding conifers to Lake Chalice Hut. The hut was only occupied by two others, so four of us were able to stay in the hut while the others camped. Saturday afternoon was spent walking around the lake, an easy, pleasant walk, with most of the track well above the lake edge. As we returned to the eastern end of the lake we were surprised to be greeted by the sound of loud music booming across the lake. Fortunately these three young trampers chose to camp out rather than squeeze into the hut.

We set out early on Sunday morning, preferring to walk around the lake edge at first to enjoy the reflections, rather than keep to the track. The lake was mirror-calm. The track climbs rapidly once you leave then lake and then settles into a steady gradient. Since it wasn’t far off the track we climbed to the top of an unnamed peak (1522m) and enjoyed great views in all directions. It was a bit hard to drop down from this high point only to have to climb 300m again to reach Old Man (1514m). To give us a break we had a lunch stop in the shade along the ridge.

From Old Man the track joins the Te Araroa Trail, but perhaps it was too early in the season as there was no one in sight. The trail carries along the ridge crest providing views south to snow covered Tapuae-o-Uenuku and west to Mt Arthur. Although parts of the ridge look narrow and rocky in places, most of it can be easily traversed with little rock scrambling. After a 2km walk along the crest we reached the turnoff to Old Man Hut and were able to head downhill. The hut was reached mid-afternoon, in time for some relaxation and a wash. Only one other person was staying in the hut so only half of our party needed to camp in the very pleasant clearing around the hut. Rob insisted on cutting the usual stack of firewood and later we enjoyed another game of dice.

On Monday morning we were away again around 7.30am, heading steeply downhill, except for two of our party who chose to walk out via Slaty Hut to Starveall and eventually come out via the Hacket a day later. In the unusually warm conditions two of our party decided to cool down by soaking their shirts in a cool stream. It seemed a long slog out to Lake Chalice Hut with a number of windfalls over the track slowing us down. We were certainly not matching the DOC track time of seven hours and reached the hut around 3pm with another hour to reach the carpark. With perfect, warm weather this was certainly an enjoyable, but tiring tramp.