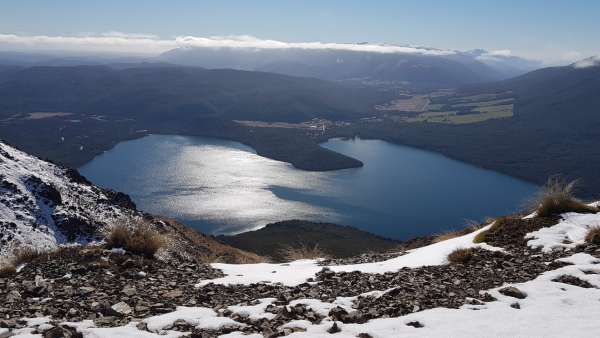 We left Richmond at 8am on a fine and sunny Saturday morning and arrived at the Paddy’s track carpark. We made our way up Paddy’s Track. One of our group was finding it a struggle so two went back to the car park and eventually caught up with us. There were glorious views of the lake on the way up. Scattered on the track were huge bags of gravel, obviously dropped by a skilful helicopter pilot. It looks as if the track will be gravelled when the weather allows.

We passed several trampers, runners and walkers, and arrived at Bushline Hut just before midday. After lunch we tramped through the snow up Robert Ridge. We had the opportunity to try some snow shoes. We passed even more people, including a couple who had just become engaged and a group of Taiwanese who were having a great deal of joy constructing a snow man. From the top we descended the Pinchgut (pinch toe on the way down) and arrived back at the car park close to 3pm.