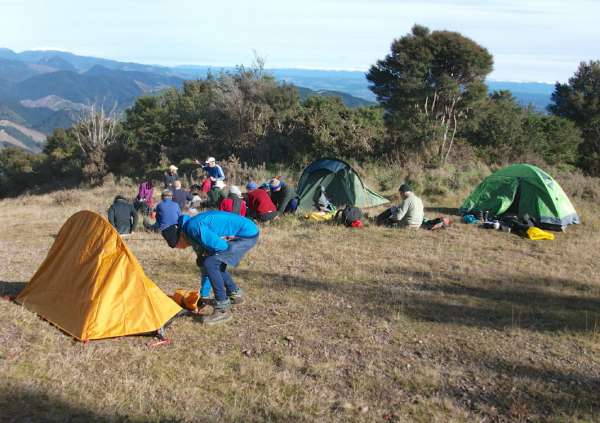 This trip richly deserves to become a Waimea TC favourite in my opinion, particularly during the short day time of the year where the day starts and finishes crisply while the sun shines exquisitely in between, as it did on this trip when a party of 16 crossed over the range, half in each direction.

Crossover trips like this one take some organising logistically. It worked perfectly today; four cars with four trampers in each. David and Maria drove to just before the Roding River ford at the end of Aniseed Valley Road while Colin and Eric drove to Marsden Valley. This arrangement meant the drivers finished the trip driving their own cars. They did remember to swap keys at lunchtime. Yay!

I was in the group starting at Roding River. We went straight into the river, literally, as the trip began with crossing the ford. It was quick enough to be relatively painless even although it had been a frosty morning. Most of us wore sandals across the ford, tied them onto our packs afterwards and put on our tramping boots. It took a little over two hours to climb up onto the Barnicoat ridge. The path zigzagged up through regenerating bush. There was a short respite for our morning tea stop in the sunshine before we bravely tackled the remainder of the ascent which was definitely steep allowing us to gain height rapidly and taking 45 minutes. The party who’d walked from Marsden Valley were a welcome sight as they waved from the lunch spot on the Barnicoat ridge itself. We were most surprised that they’d been waiting for us less than 10 minutes.

Tent pitching began in earnest. While the ground was too rocky to be able to push the pegs into, it was a poor excuse for Rob pitching the new club tent on top of its bag of pegs while insisting it must have been bought with none. At the same time various other party members had their primuses out and were cooking lunch. The most insightful first course, in my opinion, was Colin’s potato lovers mash; cheesy instant spud with numerous vege additives that he’d mixed in the previous evening. He poured on boiling water which he’d heated on site, stirred it around and then it was ready to eat. Julian won the honour of pudding-maker extraordinaire with his Ernest Adams type steamed version, heated on site and topped with the ready-made custard that he’d carried uphill in his pack without spilling a drop.

All too soon the primuses and tents were packed up and we set off again. My party continued along the ridge to the top of the Involution Trail then wound our way down it feeling that we’d done our hard work for the day in the morning. The trip was over in six hours from the Richmond Badminton Hall and back again to it. Well done Colin for coming up with the plan for this trip, including the ‘camping over lunchtime’ aspect, reccying it with me and co-leading on the day.