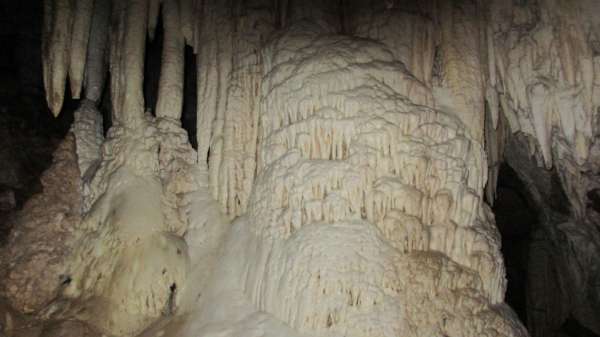 Perfect weather was on order as an elite group of four trampers headed to Salisbury Lodge for the weekend. Good time was made along the well-worn but pleasant Flora Track with welcome stops at Upper Gridiron Hut for morning tea and Growler Shelter for lunch. A highlight for all of us was the wildlife sightings on our way in. At Flora Hut there was a resident weka family including two well-grown chicks, but even more exciting was a whio family we saw at Horseshoe Creek. Just as we were crossing the swingbridge we spotted the parents and four fluffy small chicks paddling in the ford. But all the family quickly darted up the creek before we could photograph them. Apparently it has been a record year for whio numbers in the park.

We reached the hut in 4¾ hours about mid-afternoon. From the hut the Sphinx Creek loop was walked amongst deep grassy potholes containing interesting rock formations. We returned to the hut after this one hour circuit for a short rest then it was a two hour return trip to Richards Cave on the edge of tussock land south-west of the hut. Although the leader had been to the caves before it was still hard finding the correct low bush saddle. But the effort of two mistaken attempts and pushing through the tall tussock and over the elusive saddle was well worthwhile. The tall cave entrance meant access was straightforward but we still required torches to find our footing amongst the rocky ridges of the cave floor. A couple of minutes from the entrance we were spoilt by the sight of stunning, gleaming stalactites and stalagmites. We enjoyed the wonders for 15 minutes before starting on our return to the hut, unusually with no one else in residence.

On Sunday it was misty higher up on the range but it soon cleared to be fine and sunny as we returned along the Flora Track. Relaxed stops were taken at Lower Gridiron Rock Shelter and Flora Hut. Enjoying lunch at the hut, the hungry weka family of four eventually emerged from the undergrowth to provide us with more entertainment. We counted 24 cars back at the carpark, but with no others at Salisbury Lodge and with only five people seen on the track, we could only assume it must have been a very busy Sunday on Mt Arthur.