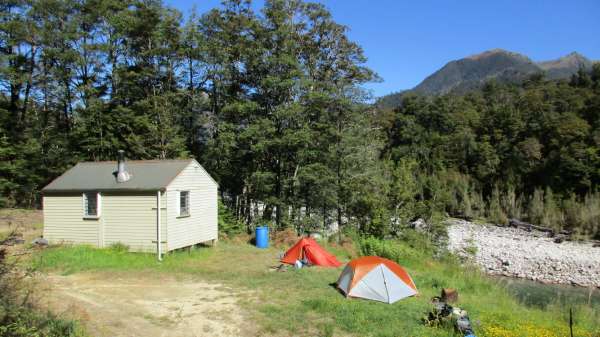 Three days of fine sunny weather on the West Coast was a special treat for eight trampers. At Cronadun 12km north of Reefton on SH69 we travelled 6km along Boatmans Road to the Capleston carpark to start our trip. But first we organised a car shuttle to the end of Gannons Road at the other end of the circuit. This avoided a 1½ - 2 hour tramp over a ridge that links the two road ends. After waiting for the two drivers to return in one car, we set off along the old dray road beside Boatmans Creek. After 20 minutes the track passed through a short tunnel that was used by the gold miners to divert water from the creek. Then we traversed a long swing bridge over Boatmans Creek. Eventually the track left the creek and started a long, steady and interminable 900m climb zigzagging up a spur. It was built in the late 1890’s at no more than a 1 in 15 gradient to enable pack horses to be driven up to the gold workings near Kirwans Hill. A short 15 minute side track leads to the very spacious 12-bunk Kirwans Hut magnificently sited at a highpoint on the ridgeline, taking about 5 hours altogether. Later on, we all left the hut to view the brilliant sunset over the Paparoa Range with stunning golden light being cast back over the hut. Many orders were issued for where people were to stand to get the perfect photo of reflections in the large frontage of the hut’s windows!

The next morning we dropped our packs at the track junction below the hut and took a 40 minute side track to Kirwans Hill. We soaked up the views to the nearby Victoria Range and 220km south to Aoraki Mt Cook and Mt Tasman. It was sunny and calm and we simply did not want to leave this special spot. After 45 minutes we relented and returned to collect our packs. About ten minutes down the main track we reached Kirwans Mine. This is a large area of open cast diggings that operated from 1898 to 1906 in a successful search for gold. Just down the hillside was a restored aerial ropeway complete with a few ore buckets attached. Just as we were wondering where the miners stayed while working here, we came upon the remains of Mrs Flannigan’s boarding house. Next beside the track was a huge metal wheel which was the terminus of the aerial ropeway for the mine. Many zigzags further down the track we came upon the very impressive Lord Brassey Stamper Battery beside Kirwans Creek. Ore from the mine was transported 1.5km on the aerial ropeway to the battery where the gold was extracted. The 5-metre tall, 15-head stamper battery has the largest number of heads of a battery on site in NZ. After being near to collapse, it was restored in 2010 by a 19-person team. Some large windfalls had obscured good photos of the battery, so after lunch most of us pitched in for a good job clearing the large and heavy branches off the stamper, water wheel and twin extraction tanks.

We continued down a pleasant bush track beside Kirwans Stream then the Montgomerie River to Montgomerie Hut taking about 5 hours on the day. This was a standard 6-bunk, so two tents were set up for three of our group. It was a fairly warm day so we spent the rest of the afternoon relaxing outside in the shade. The hut is situated on the river bank at the junction of the beautiful Montgomerie and Waitahu rivers, only spoilt by the large scar of the Garvey Creek open-cast coal mine on the ridgeline across the valley.

On the last day we ambled down the Waitahu Valley, mostly following an old 4WD track to Gannons Road. Because of some washouts, the 4WD track doesn’t look passable by vehicles, except dirt bikes or quad bikes. The track was often away from the river bank with many muddy bog holes that we needed to skirt around, but also interspersed with a few small grassy flats. After 3¾ hours we reached the road-end where we had an early lunch before again organising our car shuttle for the trip home, as well as for another group of three that were on the track at the same time. A classic weekend tramp thoroughly enjoyed by a great group.