The increased popularity of the Waingaro - Anatoki circuit, has spurred volunteers to upgrade the access to the Kill Devil Track off Uruwhenua Road near Upper Takaka, completing the work in August with funding from the Outdoor Recreation Consortium. Scrub and gorse has been cleared to make parking available for 18 cars, where previously there was only space for about three vehicles. A picnic table has also been installed, the intentions kiosk repainted and a long drop toilet also dug. The access road has been graded and re-gravelled and signage improved. The volunteers were ex-Forest Service ranger Max Polglase and his partner Beverley Johnston (who live near the road end) along with Anne Meyer.

Kings Creek Hut in the Wangapeka Valley has been repainted during March. Two new stainless steel benches have also been installed.

John Reid Hut in the Wangapeka Valley is being renovated by Nelson Tramping Club with funding being sought from the Outdoor Recreation Consortium. The open fire is to be replaced with a new wood burner. Other plans for the 6-bunk hut may include relining the hut and replacing the bunks.

Improvements are planned on the start of the Pearse Valley Track to the Pearse Resurgence and Nettlebed Cave. Recently DOC met with Walking Access NZ and a private landowner to formalise access and plan improvements to the part of the track where it crosses private land.

Falls River swingbridge is likely to be replaced or widened within the next 4 or 5 years to give an increase in maximum capacity from 5 to 10 people crossing at a time.

A new track has been cut from Observation Beach up to join the Abel Tasman Coast Track, to provide access for people being dropped off by boat at Watering Cove.

Marahau carpark is being upgraded to improve the toilet systems and about double the number of carparks. A new water supply for the toilets was sourced from across the causeway, 600m away. 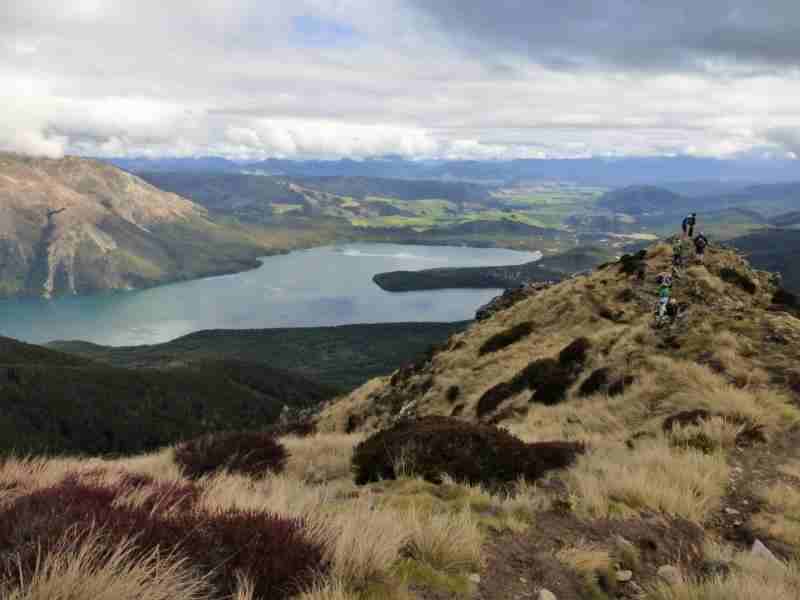 Bobs Hut and East Matakitaki Hut in the Upper Matakitaki Valley are to be revamped this summer by Rob Brown and Geoff Spearpoint, with funding from the Outdoor Recreation Consortium. They are the most original Forest Service huts remaining in the park.

D’Urville Hut is to have an internal refit to relieve the crowded and damp interior, replacing the individual bunks with platform bunks. Additional ventilation will also be installed.

Two kilometres of the D’Urville Valley Track has been washed out and will need to be re-routed.

Due to erosion the Cedric Stream swingbridge on the Sabine - Speargrass Track is to be replaced with another bridge 50m upstream.

West Sabine Hut is to have a new water tank, new plumbing and a second sink installed.

A second toilet will be installed at Blue Lake Hut. A campground area will be created near the hut along with a cooking shelter. A hut for a wardens quarters has been flown in next to Blue Lake Hut.

Other cooking shelters are also planned for Lakehead, Hopeless and Upper Travers huts.

The removal of John Tait Hut is planned for 2019 because of avalanche risk. A new replacement 28 or 30 bunk hut will be built 4km further down the Travers Valley at the confluence of Hopeless Creek and the Travers River.

The firewood supply to huts in Nelson Lakes has changed to long lengths of slab wood that need to be cut before use. Previously five to six times more pre-cut firewood was being used. DOC estimates each piece cost $5-6.

The Travers Sabine circuit is likely to move to a booking system from next summer 2018-2019. For a successful booking system on the circuit all the huts should be of equal size of 28-32 bunks. Because Upper Travers has only 24 bunks, an additional bunkroom is planned. A booking system would also affect trampers not doing the full circuit. Lakehead Hut is often used by overnight trampers and Speargrass Hut is well used by school groups.

A new replacement Caroline Creek Hut is scheduled to be built this summer, but is expected to be 6-bunk size not the 10-bunk size originally planned.

The remote 2-bunk Bull Paddock Creek Hut in the Upper Wairau Valley is closed until further notice due to structural defects.

Built in 1968, the rarely visited hut is usually accessed by crossing the Raglan Range from either the Mid Silverstream Hut or the Lost Stream Bivouac.

There are currently no plans for any new huts or hut extensions in Mt Richmond Forest Park despite a significant increase in use from Te Araroa trampers. Many of the Te Araroa users are camping so checks are being made if there is adequate flat ground next to the huts. More water tanks and toilets may be installed.

Caution is being advised when traversing multiple sections of the Te Araroa Trail between Mid Wairoa and Top Wairoa huts. Five areas are of concern, all based around erosion and very little remaining foothold space between big rocks and narrow ledges. The track has become significantly more challenging over the last 18 months. Growth of ongaonga (stinging nettle) in typical handhold areas is also making the track more difficult.