Golden Bay trampers are applying for funding to erect a tent camp on the Waingaro - Anatoki Track.

Debris building up beside the Dart Ford on the Wangapeka Valley Road will be cleared every October or November after trout spawning has finished.

Four female kaka will be released near Wainui Hut this month.

The new Buller Bridge at West Bay is due to be opened this month after a three month delay because of bad weather and remedial work needed on the bridge approaches.

New permanent avalanche signage has been installed at Moss Pass and Waiau Pass with temporary signage in the Travers and Sabine valleys.

Wilding pine poisoning will be done in the Lower Hacket and around the Chromite Mine. Also around Inwood Lookout and Gordons Knob.

The bridge across the Hacket Creek on the Whispering Falls Track washed away by flooding in April 2013 will probably not be replaced. The river bed is too wide for a suitable bridge and the cost is prohibitive.

Mt Fell Hut has been closed because it has been found to be located on an active slip and is unsafe for occupation. It is planned to dismantle and remove the hut. 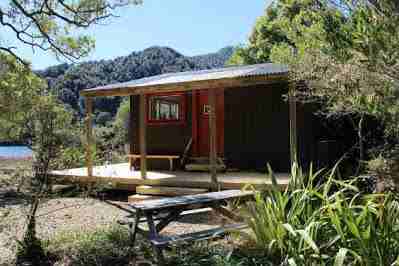 Marlborough Sounds residents are investigating cutting a new track to link the Nydia Track to the 6-bunk Matai Bay Hut. The hut located in the Tennyson Inlet has no track or road access and no jetty.

The hut was built in 1968 for hunters and is owned by DOC, and is the only public hut in the Marlborough Sounds.

It is set in a stunning location looking out to islands in Tennyson Inlet, and is used as a base for outdoor pursuits, such as swimming and sailing.

In May 2011 after the hut was vandalised, DOC planned to relocate it to Nydia Bay for wardens’ use.

Keen residents of Duncan and Penzance Bays negotiated to retain the hut, signing an agreement in November 2012 around upgrade and maintenance.

In 2013 the Tennyson Inlet Boat Club raised the hut 500mm, and constructed a deck on two sides. They also installed a new rock pathway and filled in low lying ground.

Future plans are to install a mooring and investigate cutting a track to join up with the Nydia Track and design an interpretation panel.

The hut must be booked beforehand and DOC hut tickets or hut passes are not valid.